Norton Knatchbull has a long and storied history, tracing back to the 1600s. Our history below has been compiled and contributed to by several former pupils, governors, families and members of our community who have mutually benefitted from their ties to the school.

For a long time everyone connected with the Norton Knatchbull School has been hoping that a history of the School would be written. We now all owe a great debt of gratitude to Mr. Thomas for undertaking this task. I know that Mr. Mortimore has also given a lot of help in the writing of this book and Mr. Thomas has been generous in his thanks to him in his Introduction.

I became a Governor of the School immediately after the War, after inheriting the title from my elder brother, Norton, who was killed during the War. During the past thirty years, I have watched the School grow and prosper and my admiration has been unbounded for the way the school has maintained the very highest standards in difficult times. This has largely been due to the dedicated and talented staff, brilliantly led, first by Mr. Mortimore, and lately by Mr. Cox.

Mr. Thomas says at the end of his book that few schools, if any, have kept a continuous association with the family of the Founder for as long a period as this School has with the Knatchbull family. I am a direct descendant of the Founder and indeed, in 1879 it was agreed that one of the twelve Governors should always be the Knatchbull owner of Mersham-le-Hatch, and this still continues today. I am extremely proud that my family should have had such a very long close association with such an outstanding School. We were delighted that when the time-honoured old name of “Ashford Grammar School” had to be changed it was decided to name it after the Founder, which we thought a great compliment! I wish the School every success in the future and I look forward to future generations of my family continuing our very close association.

A number of times during the past hundred years it has been suggested that a history of the School should be compiled but nothing has come of the idea. The impending 350th Anniversary seemed a good opportunity to publish such a history but today’s high printing costs have meant that only a condensed version can be produced. I am sure that everyone who reads it will find that reference to his own particular interest has been left out but far more material is available than could be included. I intend to collect and list all this material so that it can be kept at the School for future reference.

It is impossible to thank all those who have helped but there are some who have not been credited elsewhere in the book and must be mentioned by name.

Without the help of Evan Mortimore , former Headmaster and local historian, the task would have been impossible. The writings of the late Peter Woodworth have also proved to he indispensable. My special thanks are due to Robb Dunnett, a 6th Former of the School, who cheerfully kept redrawing the art-work for the cover (which is based on a painting of the founder by Cornelius Janssen in the K.C.C. Collection at Maidstone) to meet my whims. I am also grateful to Mr. C. Daynes, Head of the School’s Art Department, for constant advice on layout. The “Kentish Express” has generously provided pictures and given free access to their files. I have been unable to contact copyright holders for many of the other pictures but I take this opportunity to thank them now. Mr. L. Millar of the Ashford Heritage Centre has copied many old photographs for me.

Local historians, Mr. Arthur Ruderman and Dr. W. E. Church, have been very helpful, Ashford Library and the Kent County Archives have provided much material. I thank these and also all the parents, Old Ashfordians, teachers and boys who have assisted in so many ways.

There are many schools which are older than this one but there must be few who have kept such close links with the family of the Founder for 350th years. This will be obvious from the book but my last thanks must go the present Chairman of the Governors, the Rt. Hon. Lord Brabourne, a direct descendant of the Founder, for agreeing to write the Foreword to this book.

I hope that readers who follow the development of the Ashford Grammar School and its immediate successor, The Norton Knatchbull School, Ashford, Kent, will see that the ideals the first Sir Norton Knatchbull must have intended for his school are still present 350 years later in what is still undoubtedly `Sir Norton’s School’.

Bill Thomas’s history of the school ends in 1980. It would be foolish for me to try to summarise a quarter of a century in a few paragraphs so I shall focus on the key events. In this, I am relying heavily on Bill’s other valuable contribution to the school’s history “The Old Ashfordians (1899 – 1999)” – plus some of my own recent memories John Speller

In 1975, The Norton Knatchbull School had acquired its new name and a new status as a 13-18 Upper School. This lasted until the end of the following decade when it was decided by Kent County Council that the school would undergo a further change – this time a return to a selective grammar school, taking 120 eleven year olds. The need for additional accommodation resulted in the construction of a new block – the Brabourne Building – comparatively luxuriously appointed, which was opened on Friday 23rd October 1992. This housed the Sixth Form centre, the Modern Languages and Maths faculties and the school’s administrative offices. The Headmaster’s office was relocated to the upper floor of this building, thus releasing additional space for the growing teaching staff. An unusual and welcome featured of the Brabourne Building was the Atrium – an attractive open space which has proved very useful for meetings for drama teaching and for assemblies.

John Speller arrived as Headmaster in September 1997 and, almost as soon as he arrived, was informed that Kent would like to increase the entry to the school from 120 to 149. This, on reflection, was hardly surprising. Ashford had already been designated as a major growth area in the South East. Ashford Borough saw the population expand by 9.6% in the 1990s. A higher rate of increase was predicted from 2001 to 2011 (14.4%) and longer term projections expected the population to see continued growth to 2028. It was, therefore, a sensible decision to increase secondary schools capacity by approximately the same percentage. A similar expansion has taken place in our sister school, Highworth, and the three high schools in Ashford.

The increased intake necessitated another building which was opened in 2001. This accommodates a design and technology suite, History, Business Studies, RE, an ICT suite and three Science laboratories. Mr. E. Mortimore who had been Headmaster from 1941 to 1971 had died in 1986, as had his predecessor, Mr. L. White. However, Mrs. Mortimore was still in excellent health and we were delighted that she was able to open the new block and name it after her late husband. Another product of the expansion was the creation of a new “house”. The decision to name it after former Deputy Chairman of Governors and Old Ashfordian Dick Apps, who had devoted a lifetime to the school, was unanimous.

School numbers continue to grow and, in 2006, it is anticipated that they will reach one thousand. The recent acceleration in numbers is largely due to the rapid expansion of the sixth form, particularly the increase in students, boys and girls, joining us from other institutions. The school had become a Specialist Language College in 2004 and the proposed introduction of the International Baccalaureate as an alternative option to a level has increased our attractiveness for external students.

In the mid 1990s, the former and now redundant school building, which had been opened in 1881 and which stood between the new buildings and the Hythe Road, was demolished because it had become unsafe. For a decade the site had stood empty, an unattractive area of rubble and weeds. Its only use was as an unofficial Sixth Form car park. It did, however, belong to the Trustees, not Kent County Council, and as a “brownfield” site within walking distance of Ashford Town centre, its eventual sale and development as a care home raised a substantial sum. The sale was overseen by Richard Fraser, Deputy Chairman of Governors, who had already been recognised by KCC for his outstanding work as a Governor. He then proceeded to design, on behalf of the Trustees, a Sports Hall which would also contain provision for new Sixth Form accommodation plus a drama and a music studio. The money from the sale of the old school site had been swelled by a donation and a loan from KCC. Work started on the complex in January 2006 and it is due to open in November of the same year. The relocation of the Sixth Form accommodation will, in turn, release much needed space for the expanding numbers of classes to be taught in the main buildings.

As the years have gone by, there have been changes of personnel. At the very top, Lord Brabourne who had been Chairman of Governors for most of the fifty five years he served as a Governor, stood down in 2000 although he remained a trustee. His unwavering support for the school, his common sense, his courtesy and his sharp mind contributed enormously to all facets of school life over more than half a century. He was succeeded as Chairman of Governors by Michael Bushell who was, in turn, succeeded by Jill Humphreys in 2001. Lord Brabourne died in late summer 2005, after a short illness. He was someone who enjoyed world wide renown as a film producer and rubbed shoulders with royalty. Yet, he always had time for others and will be greatly missed.

Philip Cox retired as Headmaster in August 1997 after serving for 26 years. He retains close contact with the school, taking over as Chairman of the Old Ashfordians and acting as guest speaker at the 2005 Prizegiving ceremony.

Some long serving members of staff have also left the school in recent years. Peter Fayers and Paul Jackson retired, Tom Sutton took up an advisor’s post with KCC and Alan Masters was promoted to an administrative post with South Kent College. Nationally, the age profile of the teaching profession is rising and there will inevitably continue to be changes of staff over the next ten years. Fortunately, the success and high profile of The Norton Knatchbull School mean that recruitment of high quality candidates can be maintained.

The Norton Knatchbull School remains a centre of excellence for academic results and a wide range of extra-curricular activities – a worthy memorial to the seventeenth century philanthropist who founded it. 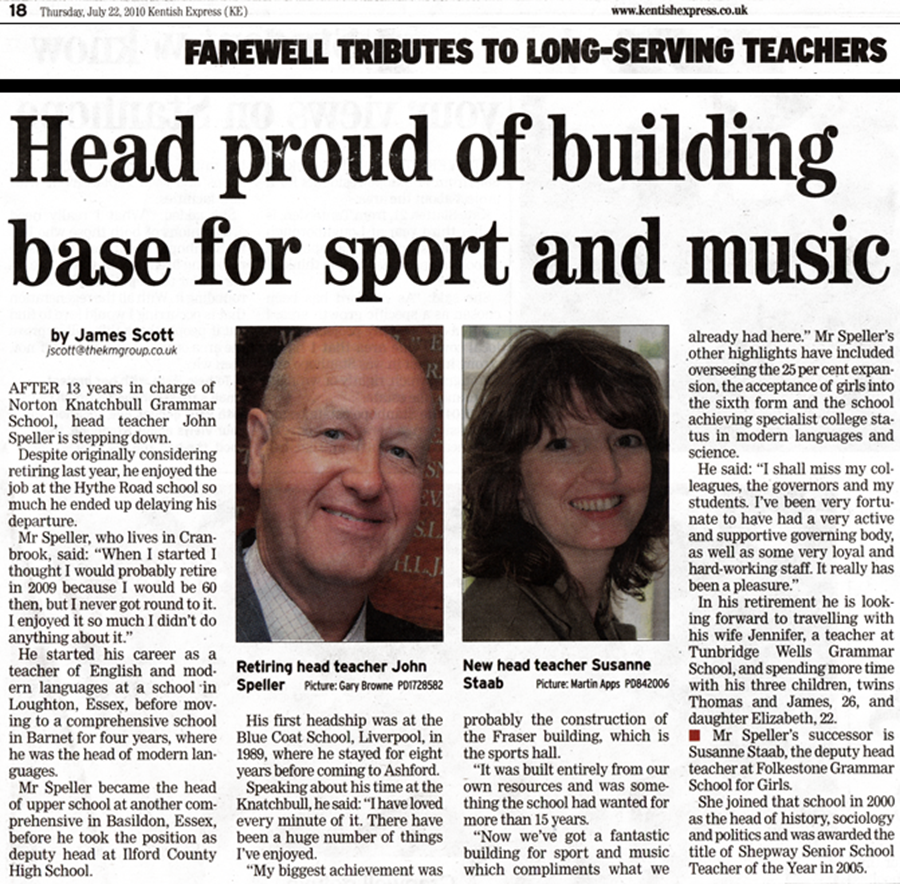